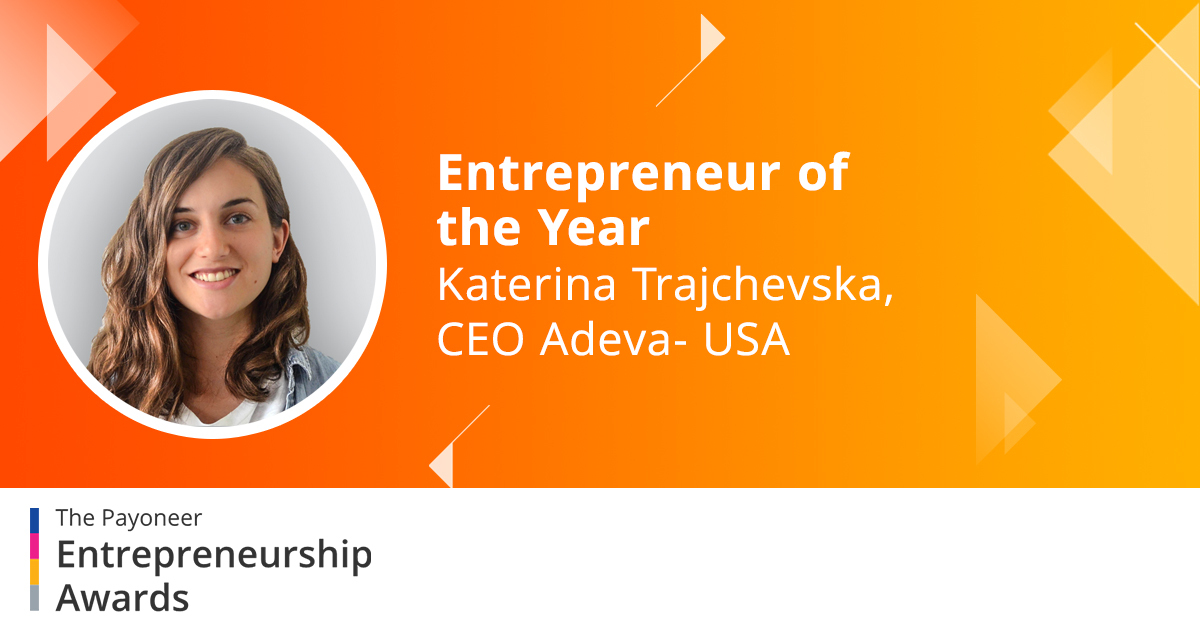 Katerina Trajchevska, our Women in Tech Ambassador for North-Macedonia, has been named “Entrepreneur of the Year” at the Payoneer 2020 Entrepreneurship Awards, an event that celebrates business success around the globe.

She was competing with 3,500 entrepreneurs from 120 countries in five categories in a contest period that began on November 12th, 2019, and lasted until December 31st, 2019.

She has been chosen “Entrepreneur of the Year” for her role as a co-founder of Adeva. Adeva is an exclusive network for developers that partners with companies to scale engineering teams on-demand and on budget. It’s a remote community, built by developers for developers, with a vision to bring equal opportunities to developers everywhere.

“Personally, I want to help inspire people to make a difference, and that is why I am an ambassador of the global Women in Tech movement. I am also heavily involved in mentoring and other projects and initiatives to help share this inspiration with others. I hope my story can show other entrepreneurs that it is possible to create their own amazing journey. No matter where you are, you can change the world, and this award is proof of that.” – Katerina Trajchevska

Scott Galit, the CEO of Payoneer, said: “There is no secret formula or recipe for success, and I am grateful to the 3,500 entrepreneurs from 120 countries who shared their journeys with us – each of your stories inspires us and motivates us to keep working hard to help more small businesses like you make a big impact on the world.”

About the Payoneer Awards

The Payoneer Awards is now in its 4th year. This year it considered 3,500 entrepreneurs from 120 countries. Its vision is to recognize international businesses that are changing the world and building their way to success.

Payoneer selects and recognizes participants in the Contest, in five different categories:

The winners are featured on Payoneer’s website, and blog and are invited to the Payoneer Forum to receive their award in front of fellow entrepreneurs.

Background Information on the Awards

The Awards Categories for 2020 and winners:

For more information about the competition please go to: https://blog.payoneer.com/news/awards/2020-entrepreneurship-awards/